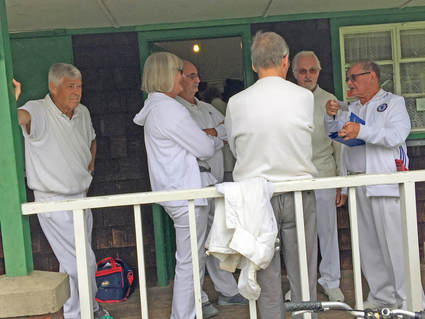 President v Captain Charity Match( Sun. 10th September 2017 )
The Captain's team ( Ted, Bob, Roger Banfield, Maureen , Dennis,Gerrard,Colin,& Dorothy )
beat the President's team (Vernon, Eileen,Roger Joslin, Chris, Derek,George, David Baker & Jonathan ) with an overall score of 43 to 39.
The Spider was won by Roger Joslin. The Obstacle Course, comprised of Cricket Stumps, Miniature Goals, and Target Flag, as per last year, plus an additional obstacle of a Noughts and Crosses Flag. Special thanks should go to John Lee for organising the obstacles and helping sort out the initial confusion.
After a break for tea and the first Raffle we continued with proper Bowls. We played two rinks for six ends. Then we enjoyed a lovely Buffet laid on by Maureen and Vernon followed by the second Raffle.
So, a big Thankyou to them both for organising the catering and the raffles throughout the season.
We raised £15 from the Spider, £65 from the match fees and refreshments, £130 from the Raffles which, with a donation of £20, gives us a total of £230.
This money will go to CRY ( Cardiac Risk in the Young ) and Teddington Memorial Hospital.